Bach's concertos and recorders in G

Subscriber Michaela asks if the first flauto part of Bach's Brandenburg Concerto N. 4 (BWV 1049) is intended for a G alto. Due to previous correspondence, Andrea Bornstein knows of my interest in this particular problem of instrumentation so he has forwarded the question to me. Michaela's request for only the first recorder part in G implies quite a bit of insight into the problem on her side, a problem that many readers may be unaware of. Therefore, before answering Michaela directly, I would like to summarize the problem for all of Andrea's faithful and happy subscribers.

There is quite a lot of literature and certainly just as much conjecture as to what instruments Bach intended for BWV 1049. So first, I would suggest glancing at the attached PDF «Fiauti d'echo controversy» taken from Richard Griscom and David Lasocki's book: The Recorder: A Research and Information Guide. New York: Routledge, 2003.

You won't find any answers to the question but you will certainly see how many people have tried to answer the question of what Bach meant by «fiauti d'echo». 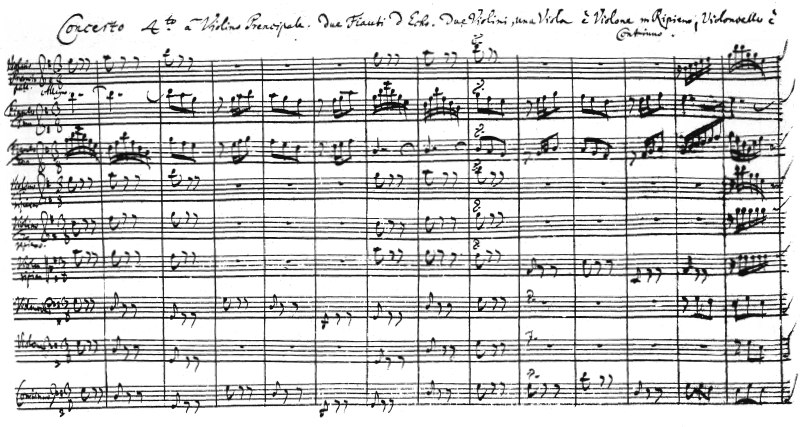 Only Bach himself could tell us what he really meant by «fiauti d'echo». What follows is therefore a recount of my musical and practical reasoning on the subject of the instrumentation of Bach's 4th Brandenburg concerto.

Take a look at the following passage:

Now, if the score was intended for G altos, why would Bach have so obviously avoided the high F#5?

BWV 1057 is Bach's transcription of the 4th Brandenburg, with the violin part given over to the Harpsichord and the whole concerto transposed down a major second. The reason it is transposed a tone lower (like BWV 1054, 1056 and 1062) was, in all probability, to allow the top note of the violin part, E5, to be reached as D5, the common top limit on harpsichords of the time. There is no doubt in anyone's mind that this concerto is intended for two F alto recorders that Bach calls «fiauti a bec». 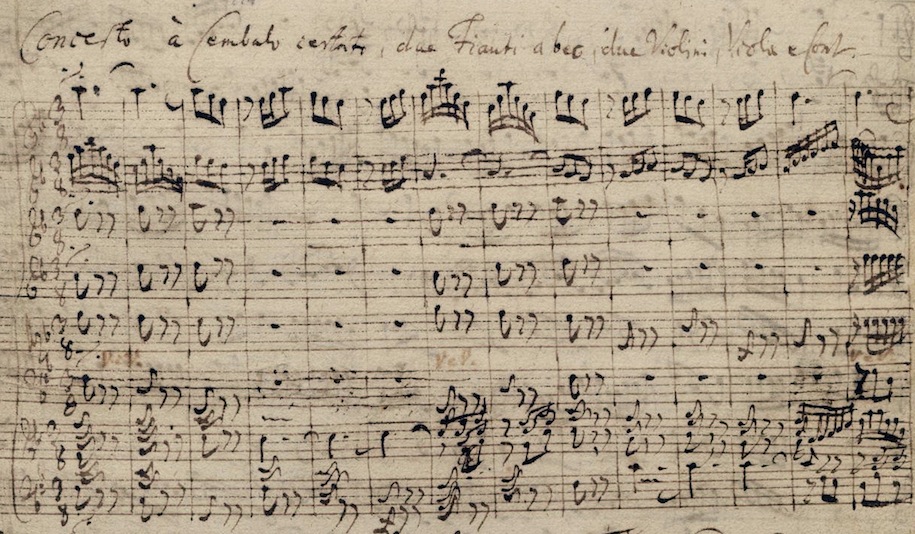 Let us now look for a moment at the above passages from BWV 1049 as they are presented in BWV 1057.

Here you will see that the progression is completely respected. You will, of course also note that Bach has chosen to embellish the recorder parts by filling in the descending thirds with 32nd notes:

Bach solves this problem with elegance when transposing to F major by breaking up the 2nd recorder's note in measure 181 into two unequal parts and incorporating an octave leap and then removing the octave leap in measure 183:

To me the above proves beyond a doubt that the 2nd recorder part was definitely not intended for an Alto in G. This does not of course preclude the first voice being played on a G alto nor does it answer the question as to why would Bach have given an F#5 to the first voice and not the second leaving us with two hypotheses:

Personal experience has shown me that, although the first movement does indeed work quite well with two different pitched instruments, the 3rd movement is decidedly more problematic for tuning reasons because of the unisons having to be played with different fingerings. Therefore I personally still prefer to perform both BWV 1049 and 1057 on two F recorders.

Alternatively, for a performance at A=440, once could opt to use a Mollenhauer Modern Altos as Michala Petri and Nikolaj Tarasov so clearly showed us in their performance of the Brandenburgs directed by Claudio Abbado: [YouTube video].

One last point of interest, the Leipzig Museum has an instrument called an «echo flute» that has two recorders connected together, one with a quiet voicing and one with a louder one. See also this page